BioRumen DFM (Direct Fed Microbial) is a daily herd supplement fed through in shed feed systems, drenching, or through a mixer wagon. Typically drenched or fed as a cold pressed pellet containing.

The revolutionary plan for improved cow health and nutrition

There are 4 steps to maximising the benefits of using our probiotic products in dairy herds:

Another autopsy was done on an Angus heifer that had been fed on Calf Xtreme & BioRumen from birth in milk and daily in 1kg of grain while on pasture. She dressed out at 250 kg at 14 months.

“The papillae in the rumen were larger and thicker and better developed for a young Ruminant than otherwise would be expected. Enhanced rumen development & greater surface area of the papillae leads to improved absorption capacity from the rumen.”
Brisbane vet

A third autopsy was done on a young cow fed BioRumen since birth
“The development and renewal of rumen papillae depends on adequate nutrient intake. Furthermore the intake of protein and energy-rich feed promotes the growth of rumen tissue, increases the number and size of rumen papillae and enhances the absorption of short chained fatty acids from the rumen of cows (Shen et al 2003).
This cow’s rumen appeared extremely healthy with an extensive population of well-developed long papillae as well as a thick internal rumen wall.
Whilst the rumen was the main focus of this investigation the three other stomachs were also found to be in very high condition and this trend continued throughout the entire intestinal tract”
Dr Dave Nolan (BVSc) Deloraine Vet Centre Tasmania

This autopsy was performed on an older cow that had been fed on average, nine kilos of concentrate daily since first lactation.  During her first year on the BioPro program she produced over 14,810 L of milk, up from 12,595 L the previous year.  At the time of autopsy and only 6 weeks prior to herd dry off she was still producing 36 L of milk from only three quarters. 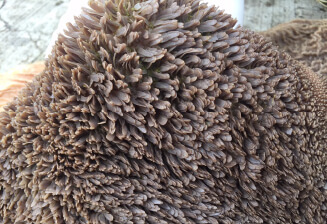 There are no reviews yet.

Be the first to review “BioRumen DFM” Cancel reply

BioRumen DFM (Direct Fed Microbial) is a daily herd supplement fed through in shed feed systems, drenching, or through a mixer wagon. Typically drenched or fed as a cold pressed pellet containing.